Posted by alastair in Nugget from the Internet

Donald Currey had always dreamed of being a botanist and in 1964 he was a post graduate studying the effects of the The Little Ice Age on vegetation at the University of Carolina. The evidence he needed was to be found in the rings inside old trees which indirectly record the weather each year of the tree’s life.

Armed with a special core drill from Sweden, Currey explored the forest of Nevada’s Great Basin National Park and randomly chose a tree to sample. He climbed it’s lower branches, positioned his prized instrument and began the laborious process of drilling a core sample. 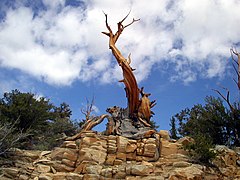 Whether it was a knot in the wood, or a poor technique, the drill bit soon became impossibly stuck and with no money for a new one or the time to order it from Sweden, Currey appealed to the Forest Service for help.

The ranger, gazing up at the drill sticking out of the trunk, head cocked to catch Currey’s pitiful explanation, casually turned to his team; “fuck this, let’s just cut her down”.

And so out came the chainsaw, down came the tree, and Currey was presented a clean cross section of the trunk to study.

It was only later that evening in his lab, as his preliminary count of the rings surpassed 5000 that he realized what he had done. Here on his table, oozing sap, was a slice of the oldest tree ever found, and he had cut it down.

The tree, a Bristlecone Pine, was named after the mythological figure Prometheus, who stole fire from the gods and gave it to man. Currey published his story in the journal Ecology and went on to become a successful scientist, although public outrage over his moment of poor judgment kept his fields of study away from trees.